Where will Appalachia Take You? 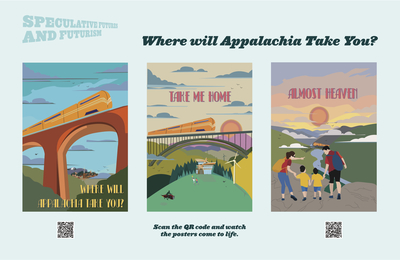 David Smith’s professional work and teaching focus largely on celebrating Appalachia’s assets and nurturing their communities. As a professor in the Reed College of Media, his journalistic and public relations projects include regional reporting projects on topics like urban and rural food insecurity, religion and identity and immigration, as well as advocacy efforts for nonprofits, communities and environmental groups in Appalachia. He’s currently on the leadership team of 100 Days in Appalachia, a reporting project at the Reed College of Media that seeks to tell the complex story of Appalachia’s people, places and lives and to look at issues through the lens of what they mean for the region. He is also brand storytelling lead for BrandJRNY, a community branding initiative. BrandJRNY works to create comprehensive brand identities for small towns in Appalachia through research-based branding efforts. His background is visual storytelling, through both traditional (photography and video) and emerging mediums (mixed reality, augmented reality, virtual reality).

Baaria Chaudhary is a mixed reality artist and developer who focuses on how immersive technologies can be used as storytelling mediums. At her alma mater, NYU, she worked in the Program of Creativity and Innovation with various mixed reality technologies to this end, including the green screen, motion capture, and VR headsets. Her project, Pawn VR, presented at AdWeek NYC in 2017, was an interactive VR experience in which participants were photoscanned and turned into 3D chess pieces in a virtual game. Baaria also helped design a live mixed reality performance called Surrogate, which was exhibited at the Shanghai Science Festival in 2017. Her most recent project, Personaland: Zen Garden, was the digital homeland of artist Stewart Wilson’s sculptures in which users could interact with the personas, enjoy a peaceful day, and experience the magic of Personaland.