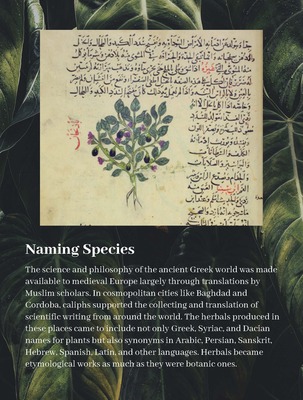 The science and philosophy of the ancient Greek world was made available to medieval Europe largely through translations by Muslim scholars. In cosmopolitan cities like Baghdad and Cordoba, caliphs supported the collecting and translation of scientific writing from around the world. The herbals produced in these places came to include not only Greek, Syriac, and Dacian names for plants but also synonyms in Arabic, Persian, Sanskrit, Hebrew, Spanish, Latin, and other languages. Herbals became etymological works as much as they were botanic ones.