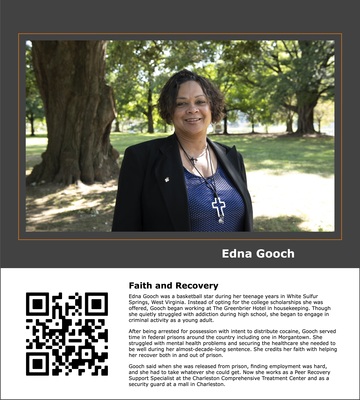 Edna Gooch was a basketball star during her teenage years in White Sulfur Springs, West Virginia. Instead of opting for the college scholarships she was offered, Gooch began working at The Greenbrier Hotel in housekeeping. Though she quietly struggled with addiction during high school, she began to engage in criminal activity as a young adult.

After being arrested for possession with intent to distribute cocaine, Gooch served time in federal prisons around the country including one in Morgantown. She struggled with mental health problems and securing the healthcare she needed to be well during her almost-decade-long sentence. She credits her faith with helping her recover both in and out of prison.

Gooch said when she was released from prison, finding employment was hard, and she had to take whatever she could get. Now she works as a Peer Recovery Support Specialist at the Charleston Comprehensive Treatment Center and as a security guard at a mall in Charleston.